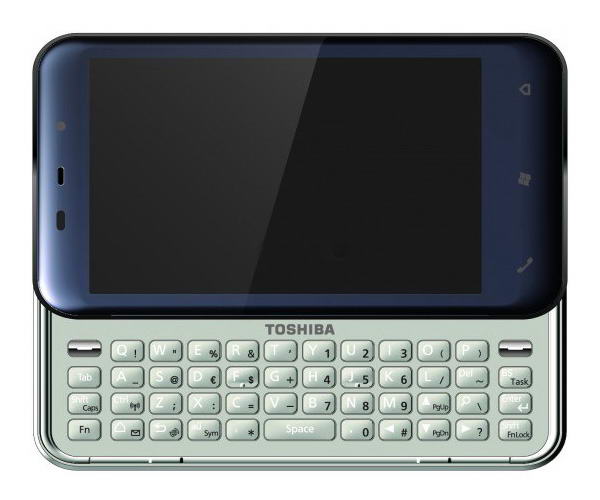 Toshiba is a well known innovator in high technology, consumer products and electronic devices. Not surprisingly they even manufacture mobile phones and today K01 is a model that we will preview. His features has been presented by Toshiba in a press release during MWC 2010 at Barcelona.

The smartphone has an 4-1 inches AMOLED capacitive touchscreen display, quite big for some of us, but with an impressive resolution-480 x 800 pixels.

As we observe from this picture, it comes with a full QWERTY keyboard disposed in 4 rows. Easy to use and thin for a QWERTY, the phone has just 12.9 mm thick and measures 122 mm from the top to the bottom.

At the back we know is a 3 megapixel camera and a 1000 mAh battery, but we don’t know further details about them. As for connectivity features, phone will have: 3G, Wi-Fi, GPS with A-Gps support, Bluetooth 2.0 and microUSB.

Another innovation introduced by Toshiba, starting with this model, is Innovation Hub.

The Innovation Hub will display a range of software solutions developed by Toshiba to improve the mobile user experience. Visitors will be able to see a range of new technologies for the very first time, including the mobile implementation of Resolution+ image tuning technology fostered from Toshiba’s REGZA TVs. Re-developed for Toshiba mobile handsets, Resolution+ improves video playback by analysing image definition and intelligently upscaling video quality to offer a sharper, clearer and richer viewing experience.

Toshiba will also be demonstrating Voice Translation – a helpful programme that uses Toshiba’s Speech Recognition, Machine Translation and Speech Synthesis technology to translate different languages[iv], synthesize back into a voice and repeat back in real time, without the need for an Internet connection. Originally developed for Toshiba notebooks, Voice Translation is an ideal tool for international business use or holidays, allowing users to communicate easily using their mobile phone, wherever they are in the world.

Toshiba K01 will be released in 2010, but a fixed date or estimated price has not been revealed by the producer.