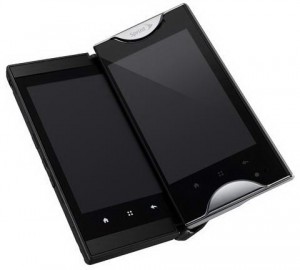 Have you ever wanted to browse two websites at once? Or maybe scroll through image folders while viewing images they contain? Well, the time has come to fulfill your wishes as Sprint announces Kyocera Echo.

The thing that makes this phone so special and cool is that it’s endowed with two high-resolution 3.5-inch WVGA touchscreen displays connected by a patent-pending “pivot hinge” that enables this two displays to operate independently, side-by-side or combined to form an oversized 4.7-inch (diagonally) integrated display. This enables users to do two things at the same time like sending an email on one screen while surfing the web on the other or using the lower display as a full-sized virtual keyboard, watch a video on one screen while texting on the other, comparison shop online with one web site on each screen-and many more things.

These features are made possible by VueQue app which also enables users watch a YouTube video on one display while surfing, queuing and loading additional YouTube videos on the other display. But Kyocera Echo is not only the best for Simul-Task Mode, which enables apps to run concurrently but independently and it also hosts a Single-Screen Mode with all the functionality of a single-display touch-screen smartphone. 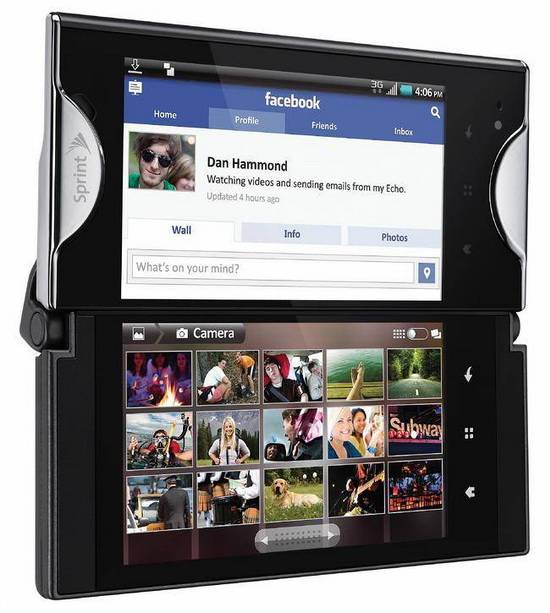 The 3rd mode of this phone is called Optimized Mode and if selected it means that both displays are using a single, optimized app with complementary functionality and enhanced usability. Other mode is called the Tablet Mode and uses one application which is spread across both displays for a full 4.7-inch viewing area. This mode is specially optimized for viewing maps, videos, websites, detailed documents, and long lists.

At the back of the phone there is a 5 megapixel camera which is equipped with flash, autofocus and 2x digital zoom. For its 5 megapixel sensor, the camera is capable of 720p HD camcorder. 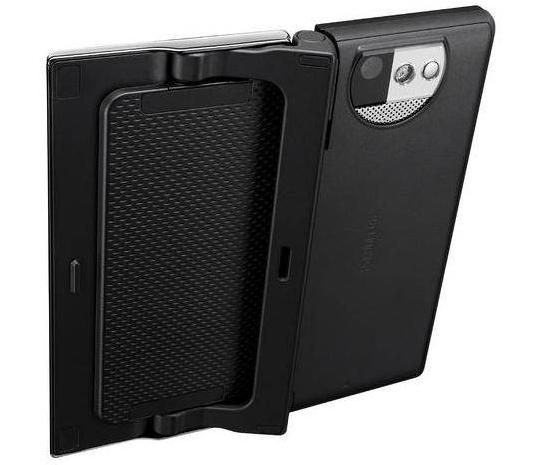 In addition to the dual touchscreen innovation, Kyocera Echo operates on the Android 2.2 system and has Wi-Fi hotspot capability which supports wireless connections for up to five devices. Other connectivity features include: Bluetooth 2.1, 3G, Wi-Fi (802.11 b/g), GPS and 3.5 mm jack port. The phone comes with a 1 Ghz Snapdragon processor(QSD 8650) and 1 Gb/512 Mb internal memory(an 8 Gb microSD card is included). In the box, along the phone a removable 1370mAh battery is included.

Sprint Kyocera Echo will be available this Spring at an estimated $199.99 (on a new two-year service agreement or upgrade).