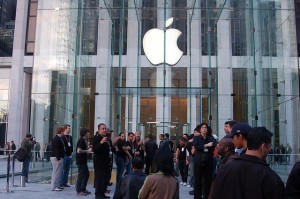 According to the WSJ, Apple will release at least one larger iPhone in 2014, though this might not be curved as some analysts speculated months ago.

Reading WSJ report, this fall Apple should announce the iPhone 6(or whatever the name will be) which will be top of the line and that should have a display around 5-inches and an iPhone 5c that would have a display between 4 and 5 inches and would feature the same specs iPhone 5s has.

The name is also something that will most likely change and this is not from the WSJ. Apple has Macbook Air and iPad Air, so I think iPhone Air should be the next step towards unifying these products. If this new iPhone will be bigger and with a new, yet intriguing design, it should deserve another name. It will the most significant change since 2010(iPhone 4) and 2012(iPhone 5) versions combined.

WSJ report indicates that both Phones will feature an aluminum design, which means Apple might drop the unapologetic plastic material used on the iPhone 5c. It appears that the plastic iPhone 5c failed to meet Apple’s selling expectations. In fact this might not be a surprise, as Apple was known for releasing premium iPhone’s, not plastic ones.

Analysts claim that Apple needs a bigger iPhone, because they are loosing market share worldwide, now that almost all companies have phones bigger than 4-inch and people like using them.

Even if WSJ have good sources, you should not take this report 100 percent true, because we are at least 7-8 months before the next iPhone release and a lot of things might change during 2014.