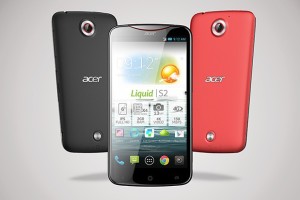 After the more conservative release of the Liquid S1, a 5.7-inch smartphone that boasted the larger screen as a key feature, Acer has announced that they are going all the way. The Liquid S2 holds a 6-inch display, and will be the first smartphone to have 4k recording capabilities.

The phablet is making headlines more for the 4k feature than the screen size. In fact, all of the camera features are the primary selling points for this model. On the S2 we will see a13MP rear-facing camera, full high definition, 4x slow motion, 27MP panorama photo view and an LED flash. A less impressive 2MP front facing camera will allow for video chat.

With the display itself we are looking at a high definition 6″ 1,920 x 1,080 resolution screen using IPS technology. It will reportedly have 338 pixels per inch. The interface supported will allow for “floating”, or having multiple apps open at once. You will be able to easily switch from one view to the other, making it a nicely intuitive device. Additional windows will appear for calls and texts, so you don’t have to close the apps to respond.

The Liquid S2 will be powered by a 2.2 Ghz Qualcomm Snapdragon 800 processor, with 16GB of on-board storage and the potential to expand it up to 128GB. It runs Android 4.2.2, and will have both 4G and WIFI available.

No word on how much it will cost when it is released in October of this year. But the S1 was released at around $430, so we can expect something similar with the S2, most likely.

Everything on this phablet is pretty interesting, though I have always been personally iffy on the whole bigger screen thing. It seems like one of those unnecessary features, and frankly a fraction of an inch increase in size isn’t an amazing jump.

However, the 4k recording capability is cool, and it is the same selling point that we are expecting to see from the next Samsung Galaxy Note, according to rumors. To see Acer of all companies beat them to the punch and announce it first is  pretty funny. I can just imagine the big wigs at Samsung when they heard that tidbit.

If you are looking for a phone that has a larger screen and is focused almost entirely around the camera features, this could be the phone for you. But if you’re looking for something more rounded you might want to wait for the Galaxy Note or iPhone 6.