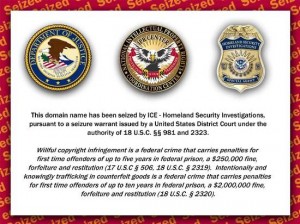 Cyber Monday is here and the U.S. authorities have rounded up the biggest group of domains. They have shutdown more then 100 domains as the spearhead to their anti-piracy efforts. The federal government is only stepping out on a limb to protect U.S. commercial interests. There are some disputes over whether the crackdown is legal, since SOPA is still awaiting approval from Congress.

It is not only piracy, they are targeting, but also counterfeiting. The initiative is called “Operation In Our Sites” and is backed by both the Immigration and Customs Enforcement (ICE) and the Department of Justice (DOJ). Their purpose is to seize and shutdown offending sites.

In 2010, just after Thanksgiving Day, 82 domains were seized. That was when it was dubbed “Cyber Monday Crackdown” by the ICE. This was due to its significance in encouraging people to buy Online. Is it extortion?

So far more than 130 domains are known to have been grabbed by the feds, launching this one into the history books as the largest ever. There are no official releases stating anything about the project, but they will most likely justify it with the same old song and dance routine.

Attorney General Holder reminds us that there are real victims to these crimes. When the hard work is stolen, money that pays people’s wages are robbed from them. This kind of theft stifles both innovation and creativity. It destroys jobs when the company takes such big losses by having its products given away for free. The Justice Department wants to put teeth on these laws and prove there are risks involved committing these crimes.

This set of attacks on criminal sites is different than last year’s. They are targeting mostly sites that charge the visitor for access to the products and services. The brunt of the sites deal in counterfeit merchandise, such as clothing. One, however, did peddle auto software they had stolen. Although last year’s focus was on free media, followed shortly after by streaming sites, there have been no such sites hit this year.

The November 2010 domain seizures scared site owners after it was publicized. So they developed alternative plans, such as purchasing additional domain names and creating backups of their sites. Even torrent sites have taken this road by snatching up second and third domain names, on the off chance that they would be hit by the feds.

Both the Protect IP and SOPA bills have forced site owners to reconsider the need for backup plans. These pieces of legislation will make seizures a regular activity of law enforcement agencies. However, considering that the agencies have already executed such a crackdown, brings up the question of the necessity for legislation. Either what they are doing is currently illegal and we need legislation to legitimize such acts, or it is legal and there is no need for further legislation. The affront to constitutional issues is of little concern to the authorities. Protecting the economy and jobs has taken precedence.