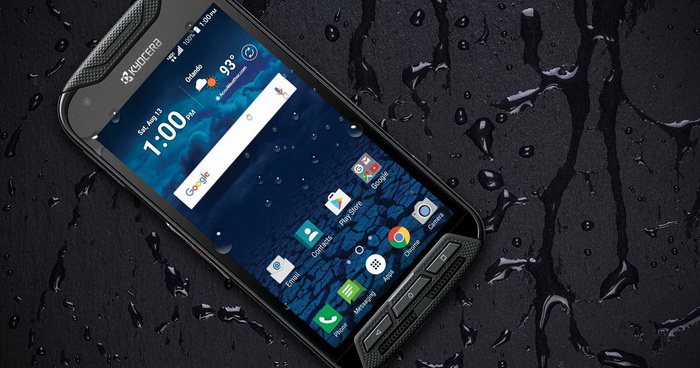 Have you ever wished you could record yourself cave diving with your smartphone? Now you can, with the more rugged, durable Kyocera DuraForce Pro. Not only is it able to withstand some pretty tough conditions, but it is equipped with a wide-angle action camera that shoots in high definition.

While many phone manufacturers have been obsessed with getting lighter weight and more dainty, others have been focused on creating devices that can withstand just about anything. Samsung is one example, as are the Sonim and Plum.

The Kyocera DuraForce Pro goes a step further. The action camera feature makes it obvious that when they say they went for a tough phone, they meant it. It certainly seems to be more hardcore than Samsung models, which offer harder to break screens and the ability to be immersed in water.

The 5″ screen is a smaller size to make it easier to hold steady during moving shots. It comes with a 720 x 1280 resolution, with 326 PPI. That might seem a little low, but the truth is that a lot of brands pad their resolution, and it makes little difference to the naked eye.

With the action camera, it shoots in full 1080 wide-angle shot, with plenty of features that improve the experience. Not only can you shoot in slow motion, or while moving at any speed, but you can also take underwater shots. While it isn’t yet compatible with GoPro mounts, there is a case pending that will be.

The actual camera for photos is standard: 13 MP back, 5 MP front. About what you would expect, but the video recording does a lot to make up for anything lacking in that department.

As for the internal hardware, it boasts a Quad-core 1.4 GHz Cortex-A7 CPU, and an Adreno 305 graphics chip. It only has 2 GB of RAM, which does put it behind the latest models coming out from other brands. There is 16 GB onboard storage, with up to 32 GB expandable microSD.

This is a decent enough phone, but not for the average consumer. Most people are going to want more bang for their buck, and so should stick to other brands. But if your primary concern is having a rugged device that won’t shatter or flood when you take it on a wake board, and you want the power of a GoPro in your smartphone, this is for you.