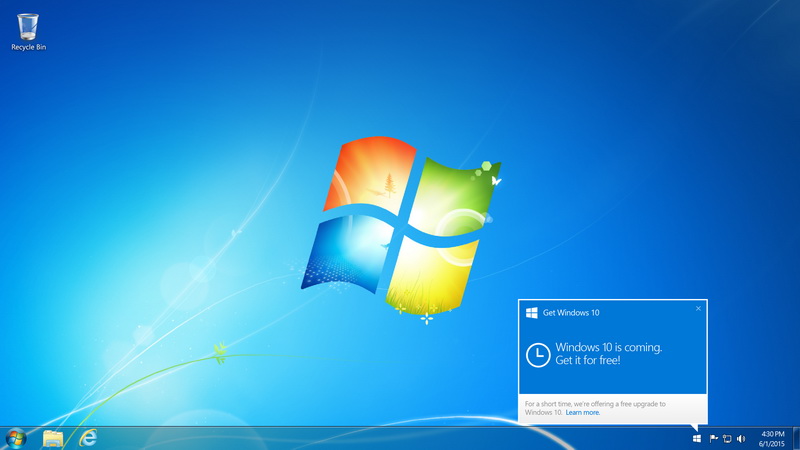 People with Windows 7 or higher may have noticed a new icon in their taskbar today. Windows 10 reservations have opened up, and you can request your free upgrade now.

Windows 10 is among one of the most anticipated releases in the tech world this year. Dubbed the “last version of Windows”, it is Microsoft’s attempt to get over the dreaded alternating release curse that ensures every other version sucks.

It is also their official jump into a more mobile-synced platformFrom Windows phones to tablets to PC to cloud to VR to XBox, their services will be integrated for maximum efficiency and user friendliness. The Windows 10 design, a more polished and developer friendly version of Windows 8.1, is a big part of that.

Using the grid format introduced for PC by Windows 8, there will still be elements of Windows 7, such as a start menu. But there will also be additions like quick access to Cortana, their Siri clone that has already managed to surpass Apple’s digital assistant in popularity.

Internet Explorer is finally dead, and it is about time. Instead we will be introduced to Windows Edge, a new browser they promise will be more light weight and based around user productivity.

Gamers who go between PC and console will be interested in the integrated XBox One app for Windows. You can communicate with your friends list and share moments that are PC. More importantly, you can stream games from your console to play on your computer. That is a major appeal for anyone who laments the lack of crossplatforming for so many XBox games.

Other little customizations have been put in place that aren’t really necessary, but a nice touch. For example, it gives you a personal greeting by name when you power up. It is the kind of thing you would expect from a startup-produced product more than a major Microsoft release.

If you want to reserve your free upgrade, and you have Windows 7 or higher, it is simple. Go to the little icon showing on your taskbar and click Get Windows 10. You will be able to put in your email to be confirm your upgrade, and will be alerted when it is ready to install.

I am personally excited, even though I will miss windows 7. Yes, that means I never made the switch to Windows 8, but I will admit a bit of a bias towards the platform.