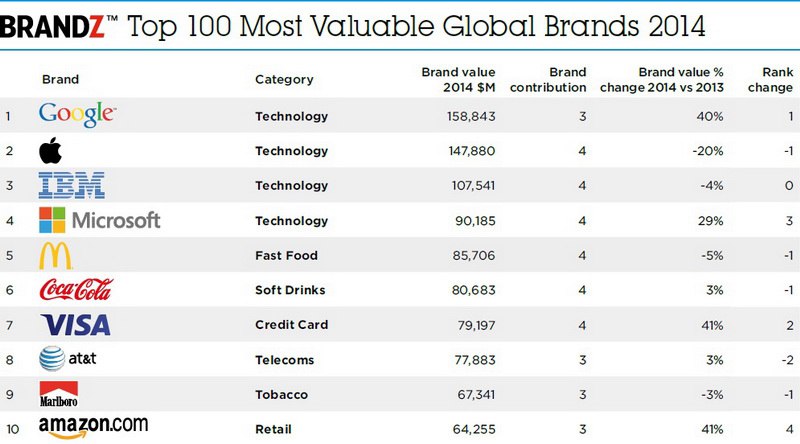 In a report commissioned by WPP’s BrandZ, a list of the 100 most valuable brands has been released. Right there in the top five are four tech brands that have managed to dominate the list.

Google, Apple, IBM and Microsoft take up the first four posts in that order. The steak of tech companies is then broken by the fifth spot, taken by McDonald’s.

Those aren’t the only technology specific companies that have taken a high position, however. Online marketplace Amazon is at #10. Tencent, a Chinese company that is the fifth biggest business in the world, has spot #14.

Only one social network made the top 25, with Facebook snagging #21. Twitter is pretty far down on the list, at #71. Surprisingly, LinkedIn managed to take a spot in the top 100, just seven spots under Twitter.

In the long run, non-technology companies remain stable on the list and take up the majority of slots. Telecom companies and food brands like Coca-Cola will always have their place. But despite being newer features to the very top, the sharp rise of influence and brand value in the tech industry is very telling. Consumer demand is growing, and even many companies that are not technically technology brands have a connection to the niche.

A 40 percent rise in brand value drove Google to the number one position in the ranking, a statement from Brandz said.

The brand has appreciated 324 percent in brand value since the inception of the BrandZ™ Top 100 Most Valuable Global Brands in 2006. Apple, the second most valuable brand, has grown 826 percent in value since 2006.

Chinese companies are also making a strong showing in value, Tencent being the best example. But a handful of others, especially in the telecom world providing mobile services, are rising.

Despite slower growth, China retained a major presence in the BrandZ™ Global Top 100 with 11 brands, only one brand less than a year ago. The performance indicates the potential impact of Chinese brands outside of China.

The fastest-growing brand in the ranking, Tencent, the Chinese social network and Internet portal, almost doubled in value, with a brand value increase of 97 percent, following a 52 percent increase a year ago. The Chinese online search brand Baidu, which is similar to Google, grew 46 percent in brand value.