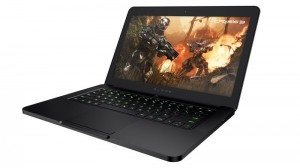 After quite a bit of hype, Razer has announced the latest two additions to the laptop family: Blade, a 14″ model that the company is dubbing the “world’s thinnest gaming laptop” and Blade Pro, a 17″ version.

This is big news for the company, who have been looking to provide a lightweight laptop that still maintains the same features of their other models. The 14″ Blade has managed to achieve that, weighing in at only 4.1 pounds and measuring 0.66″ when closed. Making it the thinnest game-specific laptop to hit the market.

Specs for the laptop are what you would expect for a high quality gaming system. The screen comes in at 1,600 x 900 resolution, with an LED backlight. It boasts a Nvidia GeForce GTX 765M graphics card, 8GB of RAM and a 128 GB SSD.

Razer’s 17″ Blade Pro is a larger version that doesn’t quite have the light weight of the 14″. But it still manages to pack a big punch in a small package. It will be 0.88″ when closed, and only 6.58 pounds.

The specs are similar to Razer’s smaller counterpart with a few extras. Namely a trackpad and a larger screen that will look a bit fuller with the patented interface Razer products have become known for with their last few releases.

For those who prefer a bit more space on their laptops, there are options for hard drive upgrades. There are both 256GB and 512GB SDD drives available. These are sure to be more popular with game developers who need more for their work. Though the company has pointed out that the basic 128GB device will be perfect for players who want to keep the price tag a bit lower.

While this is a bit more than some are willing to spend, the graphics card and general capabilities, added to the lightweight size of the laptop, make it worth a bit more cash. Especially when you consider the specs on gaming laptops that cost less than $1,000.

There is no denying this is a game changer for laptops. A sleek, thin design and lighter weight makes it a good option for the gamer on the go. While no date has been announced for shipping, they will be taking pre-orders on June 3, for a product release later this summer.