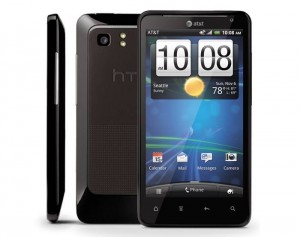 The HTC Vivid is a bulky phone, which is the first impression when it plops into your hands out of the box. It is no feather-weight at 176 grams (6.24 ounces). The thickness is similar to some of the newest notebooks, at 11.2mm (0.44 inches). There is no good reason for the bulk, either. Try to figure it out as you may, you will end up without excuse.

Compare this bulk to the promise made by Ralph de la Vega at CTIA this year. He swore AT&T LTE phones would be both thinner and longer lasting. Of course, he could only have been referring to the Galaxy S II.

The performance of the HTC is similarly disappointing. When compared against the Galaxy SII Skyrocket and the Droid RAZR, Vivid took last place in everything. You might be asking yourself how that can be, with the dual-core Qualcomm Snapdragon APQ8060 powering the phone. Perhaps the blame can be laid on the qHD pixels and Sense.

On top of this, there is the embarrassing 1620mAh battery life to address. You should not expect to depend on this phone for a heavy, daily workload. It just is not up to snuff. HTC claims the battery is only good for 5.1 hours on WCDMA and that is exactly what you will get. Of course, you can tweak the phone here and there to squeeze out more hours, but you will not be using your phone regularly for your work then.

While HTC is traditional associated with cutting edge design, the Vivid comes across as a throw back Droid. It is ultimately a misfit child of HTC, in terms of design. This is due to the black plastic case, as opposed to the typical aluminum uni-body construction of other HTC phones.

The backside has an 8MP camera mounted beside a dual LED flash. Front side, there is a 1.3MP VGA camera. While the backside camera shot beautiful photos, the front-side video was washed out and shaky. The audio is terrible, even on a calm day, not to mention the incessant distortion.

The beauty of the front side, though, is the 4.5 inches of screen real estate. At 960 x 540, the phone carries a qHD TFT Super LCD that will blow your socks off. Solid daylight outside will wash it out, but the viewing angles and indoor crisp colors make it s beautiful showpiece.

Browsing full websites will be a small problem for the impatient. However, this phone is not spilling over the brim with bloatware. You get a fair bit of bloatware, but not too much. The Vivid comes loaded with Navigator, U-verse, FamilyMap, Radio, Music, and TV applications, not to mention Facebook, Need for Speed, Twitter, and Qik lite. Let’s not forget the Vivid comes loaded with the lastest version of Android Gingerbread v2.3.5.

The conclusion regarding the Vivid cannot ignore its downright ugly looks and useless weight. Compared to the only other AT&T LTE phone, the Samsung Galaxy S II Skyrocket, the Vivid is left crying in the dust. The Skyrocket is lighter, more stylish, and carries enough punch in its battery to get you through the day.