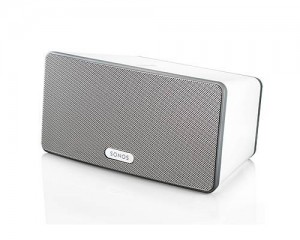 Sonos is an electronic company founded by John MacFarlane. To those who are not familiar, their products use WiFi in order to play music. The company is based in Santa Barbara, California and was founded in 2003.

The Sonos Play: 3 is a smaller and a cheaper version of their wireless internet connected speaker line. Although the brand is known for their expensive line of products, the Play: 3 is said to be the all-in-one wireless product. While it retails at $299, you will notice that it happens to be less pricey than the Airplay speaker by JBL, which sells for $350. The sound quality of the Play: 3 is similar to its bigger version, the Sonos S5.

For promotional purposes, the company slashed the price of its bridge from $99 to $49 in order to attract Sonos owners to setup their own Sonosnet mesh network into the air. Nonetheless, the Play: 3 will still work without a bridge; users only need to plug it in to a router.

A distinctive feature of the Play: 3 is something called the orientation sensor. This fine tunes the device automatically depending on how the Play: 3 is placed, vertically or horizontally. The good thing about its size is that it will be easier to fit it virtually anywhere. It can be placed on book cases, at the top of a table or mounted onto a wall.

The speaker goes in three sets upon purchase, one tweeter and two mid-range speakers measuring 10.5” x 5.2” x 6.3”. Together, all 3 produce an impressive high frequency sound quality, and it comes with three drivers and three amps. In addition, it comes with a rear firing bass radiator.

The Play: 3 has a stereo pairing mode where you can combine two Play: 3’s (or more) at the same time. With a wireless bridge connected, the user will be able to play music that is stored from any computer or portable music device. iPhone, iPod, iPad or Android users can even download an app to control the music playing in the speakers, or they can also choose to purchase the Sonos Controller 200 for $349.

When asked about Sonos’ customer fan base, MacFarlane stated that their consumers remain the same. They are fans that enjoy music that can be played all around the house. When consumers want the music to be played and enjoyed for every family member in the house, they can do so with Sonos but not with Apple. In addition to the Play: 3, MacFarlane talked about their high-end device, the S5 or Play: 5. He admitted to the Play: 5 being simply the finest available device in the market and that there is no need to top that off right now.