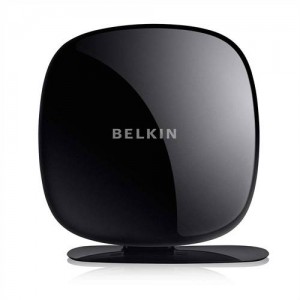 Belkin’s newest wireless dual-band router will push the range of your Wi-Fi much farther and compensate for problems you may be experiencing. It’s improvement to the MIMO technology gives it the edge over other wireless routers.

MIMO has been with us since 802.11n first came out. MIMO coverage is almost two-dimensional, in a circle. The Belkin gives a three-dimensional coverage, though, that encompasses stories above and below in a house, for example.

The company swears that their 3-stream transmission contributes to a 50% improvement on throughput. They also claim the Belkin N750 focuses the stream on the Wi-Fi device, rather than scattering it in all directions all the time. They call it “implicit beam forming”.

In reality you will see this 50% increase on all of your devices and the Internet will load up more quickly. Streaming movies will prove no problem, even if you had had difficulties before. No buffering will be needed at all.

Many routers in the field are still of the 10/100 generation, but the Belkin N750 is a Gigabit Ethernet device. Assuming your computer is new enough to have been fitted with a Gigabit network card, your throughput will show significant improvements.

The dual-band feature may not prove to be advantageous for you, it depends on your needs and in switching over to it you may experience a drop in signal strength, losing that extra 50% you gained with the Multibeam technology on the 2.4GHz band. It is true that far fewer devices out there use the 5GHz band, and so the 5GHz band has less competition and interference, but that signal strength drop may drive you back to 2.4GHz. If you do anticipate using only the one band, you might be better served buying the cheaper Belkin N450 at about two-thirds the price. It offers only the 2.4 GHz band, but still carries the Multibeam technology for the 50% signal boost.

Once you see the apps included with the N750, though, you might shell out the extra cash for it. Not only does it have two USB ports that the N450 does not, it can use them through its apps. Connect a backup drive and use the Belkin app, Memory Safe to do scheduled backups of files to the drive. The Print and Storage Manager simplifies the routines involved in monitoring and managing hard drives, printers, scanners, or any other USB device.

Summarizing the features, the Belkin N750 sells for $130 from Belkin, but between $99-$130 on the market. The advantages are that it has two USB 2.0 ports, dual-band (2.4GHz and 5GHz), extended Wi-Fi range, and Gigabit ethernet. The one physical drawback it that it lacks status lights.

The Belkin N750 forges ahead where other companies are dragging their feet. The world is sitting on pins and needles, waiting for the 802.11ac or ad wireless standards to be included on devices, but router manufacturers like Belkin continue to innovate. The Belkin N750 will satisfy your lust for more signal strength, faster Internet loading times, and just plain higher throughput.